River Cleanup is spreading awareness across the globe. Today, they are reaching a massive crowd of volunteers and sponsors, but it all started with one man and a 10-minute challenge. It started with one single drop in the ocean, and that image inspired us immensely to refine this empowering organisation’s branding.

What began with one man and a 10-minute challenge, resulted in a worldwide happening. When Thomas de Groote was picking up the trash in front of his house, he wondered where all this litter would be going if it wasn’t for volunteers like himself. Through research he discovered that every year, 8 billion kg of waste enters our oceans, 80% of which originates from rivers. So, now he understood the matter, he undertook action, too! He launched his own non-profit organisation and started at the main source of the pollution. River by river, his initiative expanded and also the need for professional support grew. That was our cue: Duval Branding helped to solidify the foundation of the River Cleanup community.

We met a caring team with strong values, but although their brand conveyed professionalism, it was drowning in distant seriousness. First, we composed a compelling brand story fuelling our designers to explore new ways of engaging visually in a sincere yet supportive fashion. The custom-made ripple effect in the logo spreads a more inclusive and welcoming impression. With people and community at the heart of every design, we evoke an inspirational and relatable feeling. River Cleanup is encouraging people around the world to immerse themselves in the "Yes, we can!" spirit. 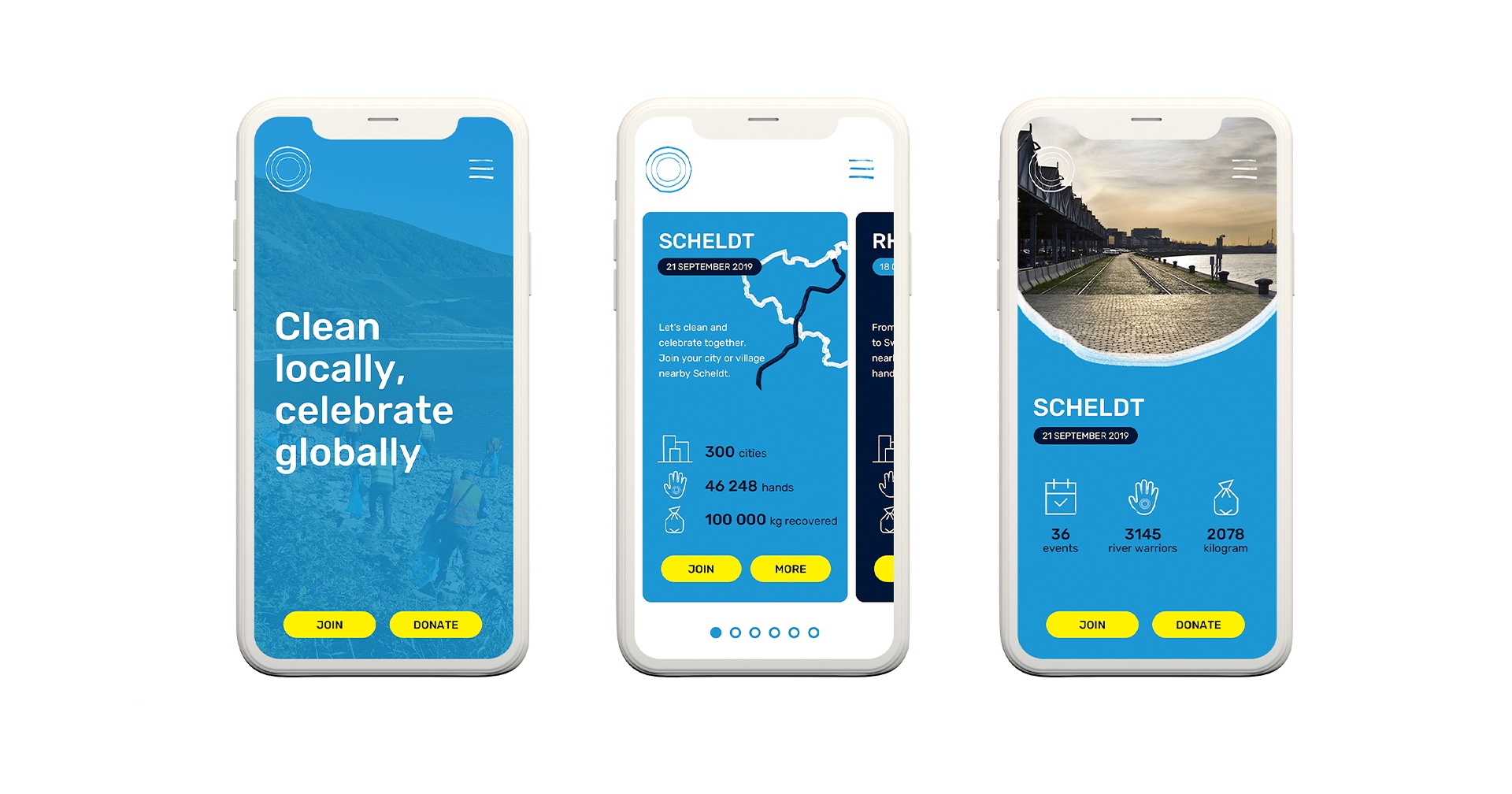 To spread awareness and activate even more River Warriors, a mobile-friendly website was at the top of our bucket list. Minimal text, maximal focus. A platform to easily organise your own event, join an existing one or provide support as a sponsor. The River Cleanup team is also passionate about educating people without bias or ‘guilt tripping’, therefore, it was vital that their brand was spreading the right message across every channel – and canal.

Drop a line? Don’t mind if we do! The tagline conveys positivity as well as connectivity.

River Cleanup is cleaning up our act, too.

At Duval Branding, we not only picked up the message as such, we actually picked up trash and litter at the Scheldt and Tomorrowland clean-up events. We joined forces in the field to experience the organisation's values first-hand. Not only the nature of this operation, but also the close collaboration between several Duval Union companies makes for a massively rewarding case. The platform was developed by Duval Union partner SevenDays and the PR & social activation orchestrated by MMBSY.

Wave the flag, join the wave!

The River Cleanup flag is an indispensable element that proudly puts River Warriors in the spotlight.

Clean your ear canal, too

River Cleanup is a global movement that started with one guy, one goal. Put on your rain coat/hero cape, plug into our playlist for that extra push and pick up the litter in the gutter of your street. It's as easy as fulfilling.

Check out our other work